During the previous edition of the tournament, the arena hosted four matches (the final, one semi-final and the 3rd/4th-place and 5th/6th-place play-offs), while this year it will hold one more fixture, as both last-four games are to be played there.

Opened in 2011 despite construction beginning in 2003, the stadium includes a running track that makes it a multi-purpose venue. Indeed, it has been the stage for important events such as the 2014 IAAF Continental Cup and this year's African Championships in Athletics.

It has hosted important matches played by the Moroccan national team, and has replaced Stade El Harti as the regular home stadium for club side Kawkab Marrakech, who currently sit second in the Botola Pro (Morocco's domestic league). 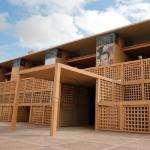