0
No Real Madrid fan will ever forget 2014, the year in which the Whites were crowned world champions. Against San Lorenzo at the Grand Stade de Marrakech, they claimed their 22nd consecutive win and added the final flourish to 365 historic days in which they have won the Champions League, the European Super Cup, the Copa del Rey and this unforgettable Club World Cup.

It was not easy to overcome a streetwise Argentinian outfit that defended in numbers and for whom time was its ally. As was the case in the semi-final, Ancelotti's dead-ball preparations proved key. The same men were to the fore as against Cruz Azul, as Kroos delivered the corner after 37' and Ramos scored with his head once again.

Specialist at set-pieces
A spectacular Club World Cup from the Madrid vice-captain, who again showed that he is right at home when it comes to the big occasion. Little more can be asked of the hero from Lisbon; all the more so considering his fitness issues in the run-up to the game.

The injury suffered by Marcelo, who was substituted by Coentrão on 43', was the only negative mark on a first half that saw Madrid dominate from start to finish and both Cristiano Ronaldo, in the first minute, and Bale, in the move that preceded the opening goal, could have broken the deadlock for Madrid earlier.

The Whites enjoyed a much more positive start to the second half, as they settled the final on 51'. A threaded through-ball from Isco found Bale, who used his first touch to trap the ball dead in the area and his second to unleash a shot that squirmed underneath Torrico's body.

From then on, Real Madrid were enjoying themselves and their best minutes arrived. Indeed, Benzema's flick over Mercier and subsequent shot came close to surprising the Argentinians' goalkeeper after 63', and Bale's right-footed cross in the following move hit the bar.

No goals conceded in Marrakech
Far from facing a siege from their opponents, possession continued to be dominated by the European champions, who were after more goals and looked extremely assured at the back. Bale crossed with the outside of his boot on 73', Benzema's first-time effort flying centimetres wide of Torrico's goal. In the final stages, Casillas popped up with two good saves to deny long-range drives from Kalinski after 84' and Mercier two minutes later.

To chants of "Campeones, campeones!" and with Ramos handed a rapturous ovation as he was replaced by Varane, Madrid closed out a Club World Cup in which they did not concede once. The fans are jubilant, and Real Madrid are on top of the world. 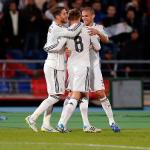