“We seal a powerful alliance and the creation of a gigantic digital platform capable of changing the relationship of millions of fans with Real Madrid,” said Florentino Pérez.
Real Madrid unveiled its agreement with Microsoft in the presidential box of the Santiago Bernabéu. Prior to an enjoyable practical demonstration of this powerful digital tool, Florentino Pérez, president of Real Madrid, and Orlando Ayala, chairman of emerging markets at Microsoft Corporation, both gave speeches.

Florentino Pérez offered his positive assessment of the agreement: "Today we seal a powerful alliance and the creation of a gigantic digital platform capable of changing the relationship of millions of fans with Real Madrid. It is essential to remain at the technological cutting edge and for this reason we have chosen Microsoft to lead this commitment to the future," said the Whites' chief.

“In every country, on every continent, there will always be millions of Madridistas connected by a feeling that knows no borders, and we will be there with you. This club always seeks excellence and there are areas in which this club has proved a pioneer. Today, we again inspire one of those areas. We must keep pace with the new times and strengthen the pride of belonging to the best club in the world."

“The Madridistas that constitute this gigantic digital community come from every country, but have one common denominator: their passion for Real Madrid. Those who made Real Madrid the greatest legend in the history of football marked out our values. A course whose objective is the conquering of new horizons, goals and challenges. Santiago Bernabéu and Alfredo Di Stéfano created the greatest factory of dreams in the world and the insatiable necessity to be better every day, and today we seal a digital revolution to channel the emotions of Madridistas." 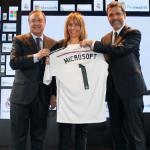