“Here today, Madrid fans can acknowledge that Cristiano is Alfredo Di Stéfano's worthy successor”, said Florentino Pérez, who was presenting the trophy.
Cristiano Ronaldo received his third Golden Shoe award today at the Meliá Castilla hotel in Madrid. This is the second time he has won the award as a Real Madrid player. The Portguese star was accompanied by the president Florentino Pérez, his team mates Casillas, Ramos and Bale, various members of the Board of Directors, as well as the head of Institutional Relations, Emilio Butragueño. Ronaldo received the award after scoring 31 goals during the last La Liga season.

"This is a special day for me. It is the third one, but it is as if I was winning it for the first time again. I want to share it with everyone who has helped me. I promise the fans that I will always give my best on the field because I still have many years ahead at Real Madrid" stated the Portuguese player.

"I want to thank my team mates as it would have been impossible to win this trophy without them. I would also like to thank my family and everybody at Real Madrid, which is best team in the world and gives me the opportunity to win awards like this. I can increasingly feel that people really love me here".

Florentino Pérez was in charge of presenting the trophy to Cristiano: "His unending desire to overcome obstacles has turned him into a different type of player and anybody who knows him is aware that he will leave here today in search of his fourth trophy. Today, he is receiving his third Golden Shoe, his second as a Real Madrid player. Therefore, this is a happy day for him, his mother, his family, for all Real Madrid fans and anybody who loves football. Our fans have really embraced Cristiano because he has given everything on the pitch and left us with many great memories."

"We are proud of Cristiano Ronaldo at this club, football can be proud of him, he is a role model for young players. He has once again shown the world that he is a true legend. He is a legend at Real Madrid, as he shows in every game, and an example of impeccable professionalism, as shown through his behaviour every single day. Cristiano combines his unquestionable talent and quality with an immense level of commitment".

"This desire to always win, is what really unites Cristiano with one of the core traits of Real Madrid's identity. Only a few months ago, we lost out Honorary President Alfredo Di Stéfano. Today, Real Madrid fans can acknowledge that here we have Di Stéfano's worthy successor. Congratulations for being a member of one of the best squads in Real Madrid's history. This is a squad which will not be weakened by such praise, and which knows that it must always give everything, just as you do, in order to improve and fulfil the dreams of our fans".

Cristiano Ronaldo won the Golden Shoe during the 2007/08 and 2008/11 seasons. The prize goes to the highest scorer to come out of any European league over the season, and is awarded by European Sports Media (ESM), a sports media group made up of the world's main football publications. 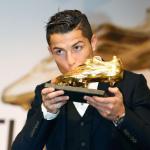