Goals by Benzema and Bale, with Cristiano Ronaldo setting up both, earned Real Madrid their sixteenth straight victory.
La Rosaleda

2
Malaga will go down in history as the city where Real Madrid recorded their sixteenth consecutive victory and established a new club record for straight wins. The Whites are unstoppable and showed it by dominating the encounter from the beginning. Indeed, they registered the first three shots on goal. The best of those efforts was the last. In the 12th minute Bale laid off the ball to Cristiano Ronaldo who shot from the penalty spot but Kameni salvaged things his team with a commendable save.

The match was going as the Whites wanted, with plenty of space around the pitch and an exchange of passes with which they were able to open up the scoring. James began the lethal counter-attack in the 19’. Cristiano Ronaldo received the ball from the Colombian on the left wing, pulled the defenders in with two step-overs and set up Benzema, who finished the move off with the outside of his right boot. That was the Portuguese star's sixth assist from his last six games, with three of them setting up the Frenchman.

A long-range free kick by Duda, which hit the crossbar in the 43’, put an end to an exciting first half of football. The second half also got off to a compelling start with Real Madrid creating two clear chances on goal before a quarter of an hour had been played. Both of them came through passes from Bale, with one minute separating each. The first saw a Cristiano Ronaldo bicycle kick go centimetres wide of the home team's goal in the 54’, while the second came from a counter-attacking move which began with Isco robbing the ball before eventually failing to beat Kameni in the resulting one-on-one.

The Madrid players approached the opposition's final third more diligently during the second half, but were up against an inspired Kameni. That was certainly the case for the most clear-cut chance of the match. A series of errors in the home side's defence in the 76’ saw the ball arrive at Cristiano Ronaldo's feet near the penalty spot with only the Cameroonian keeper to beat, but the latter once again saved his team.

Cristiano Ronaldo's second assist
He was unable to do the same seven minutes later though. A long ball from Marcelo was headed on enough by Cristiano Ronaldo for Bale to run onto it, and the Welshman exhibited his blistering pace, to beat the two defenders, and his quality to score his team's second with his right foot.

From then on, Real Madrid, despite Isco's harsh sending off in the 86’ for a second yellow card, were happy to control the game and close out this historic win. Santa Cruz narrowed the deficit in injury time, but it was too little too late. This team had accomplished something never before done in the club's 112-year history. 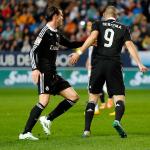