Real Madrid beat Liverpool with a Benzema goal and are now just one point away from finishing top of the group.
Santiago Bernabéu

0
Real Madrid continue to add to their number of straight victories. They recorded their twelfth in a row against Liverpool and did so once again with complete authority. Yet again the supporters left the Bernabéu satisfied with their team, who barely broke a sweat and did not allow the opposition a single shot on goal throughout the first half. Perhaps benefitting from their great streak of form, the Madrid players came out of the traps flying. They already had two clear goalscoring opportunities within the opening ten minutes, but Mignolet's saves in the 4’ and 10’ to prevent James and Cristiano Ronaldo respectively kept them at bay.

The home side's dominance was not in dispute. The ball only seemed to move between the Madrid players' boots and was knocked around from one side of the pitch to the other. The best example of that came during the opening goal. Four players were involved in the build up play, with none taking more than two touches. Isco started the move in the 27’, playing a one-two with Cristiano Ronaldo before passing the ball to Marcelo. The Brazilian controlled the ball on the left wing and crossed it towards Benzema, who sent it into the roof of the net with a deft touch. The fans in the Bernabéu were in awe of their team and the beauty of the goal.

The game did not change much after the goal and the only reason Real Madrid went into the break with such a narrow lead was down to a fine save by Mignolet to deny a long-range Cristiano Ronaldo effort in the 34’ as well as Benzema lacking a rub of green with a lob that went inches over the crossbar.

A lesson in robustness
Real Madrid controlled the encounter in a second half livened up by the presence of Bale, who came on for James in the 62nd and nine minutes later was close to getting his team's second. Marcelo, who had a spectacular performance, put in another cross from the left wing and the Welshman, lurking near the penalty spot, hit the bar with his left-footed shot.

That was not the last chance of the game. Bale forced Mignolet into a reflex save from a goal-bound free kick in the 84’. A serious game by the Whites, who have now gone two matches without conceding and are now through to the Round of 16. With one point from the remaining two games they will seal first place in the group. 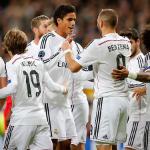