4
The La Liga leaders visited Ipurua in league football for the first time ever, and did not disappoint on their return to action after the international break. Real Madrid, missing the injured Modric, prolonged their run of consecutive victories to boast 14, and sit just one win away from equalling their all-time record. The team stood up to be counted from the first whistle against a combative Eibar side that looked to take advantage of the reduced dimensions of the pitch and give their visitors scant room to breathe.

The first goal
Perhaps it was for this reason that, with the first quarter of an hour up, the most dangerous move thus far came from a dead-ball situation. Bale fired in a free-kick, the ball hitting the bar despite a commendable intervention from Irureta. It was a warning of what was to come, as the Whites' next opportunity saw them make it 0-1 in yet another demonstration of their immense cutting edge in attack. On 23', Cristiano Ronaldo got his foot to the ball before it crossed the touchline and turned the touch into an assist for James, who headed in at the far post. The hardest part had now been done.

Eibar wasted little time in offering a response, but Casillas - a specialist in one-on-ones - remedied the situation when Capa crossed after 31', the Real Madrid captain denying Saúl Berjón. It was proving a vibrant encounter and it was soon the guests' turn once more to create danger. Isco crossed to the back post from the edge of the penalty area on 36', Pepe nodded down and Ramos, shooting left-footed from the penalty spot, came up against an inspired Irureta.

Before the break, Real Madrid stretched their advantage. The move came on the right wing, an area in which they found plenty of joy during the first half, and was a beautifully worked one. After 43', Carvajal played a one-two with Bale, who returned the ball to his team-mate with his heel, and Cristiano Ronaldo took full advantage of the Spain international's cut-back to beat Irureta. The Portuguese star, who has scored against every team he has faced in La Liga, made it eleven consecutive league games in which he has found the net and extended the spectacular scoring record that sees him at the top of the Pichichi rankings.

Excellent solidity in defence
Real Madrid continued to dominate possession in the opening stages of the second half, and enjoyed the first moment of danger. James delivered a free-kick on 54' and Ramos - this time with his head - was again thwarted by Irureta from a position around the penalty spot. Madrid were proving highly solid at the back, and allied this good defensive work with spectacular levels of commitment. That was how the third goal arrived in the 69th minute. Marcelo won back what appeared to be a lost cause and on this occasion it was James, rather than Cristiano Ronaldo, who just prevented the ball from going over the byline. Benzema finished in space.

The strike did not signal an end to the scoring. That came after 83', as Cristiano Ronaldo's free-kick caught the arm of Albentosa inside the area. Fernández Borbalán pointed to the spot and the Portugal man converted the penalty. Nobody in the history of La Liga had reached the 20 goals that Cristiano boasts within 12 matchdays. The league leaders had not disappointed, providing a lesson in hard work, cutting edge and defensive solidity on a ground made difficult both by its dimensions and by the hosts' dedication. 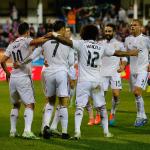