Keylor Navas made the most saves last season and played a big hand in ensuring that Levante conceded the fifth fewest goals of all the teams in the division, only trailing behind the four sides that qualified for this season's European Cup. He beat Courtois and Caballero in the voting.

“It is an honour to be here. Hopefully in the future I will be able to attend another ceremony like this. Awards help to confirm that you are on the right path and to inspire you to keep working. This is a spectacular team and we are very happy with the work we are doing. As footballers we always want to win, it is important to have that mentality. You have to fight for everything with Real Madrid”.

Ramos: "Without my team-mates this wouldn't have been possible”
Sergio Ramos, who held onto the award he won for the 2012/13 season, played 32 games last year and scored 4 goals. The Real Madrid vice captain finished ahead of Filipe Luis and Miranda in the voting.

“The ceremony was phenomenal. This recognition is a bonus that inspires you to keep working for the future. It gives me great pride to be here again to collect this award. I want to thank my team-mates because without them this wouldn't have been possible. The important thing is team work. I would like to offer my condolences to the family of Pepe García Carpintero, a great professional and great journalist”.

Modric: "My team-mates at Madrid have helped me to grow"
The gong for outstanding midfielder went to Luka Modric, who made 34 Liga BBVA appearances last season and saw off Gabi and Busquets in the voting to win: “I am very happy. I would like to thank everyone who voted for me as well as my Real Madrid team-mates, who have helped me to grow as a player. I want to thank the Real Madrid fans as well, they are very important to me”.

Three awards for Cristiano Ronaldo
Cristiano Ronaldo, who received his Best Forward award from his team-mate James, was the top marksman during last season's La Liga campaign, notching up 31 goals in 30 games. This tally also saw him pick up his third Golden Boot award. He saw off the challenge of Diego Costa and Carlos Vela in the voting.

He was bestowed with the Best La Liga Player award and, on top of that, his back-heeled volley against Valencia in the Santiago Bernabéu saw him win the Best Liga BBVA Goal for 2013-14. The Portuguese man's strike beat Messi's goal against Almería and Giovanni's against Valencia.

“We all like to win individual awards. It was a wonderful night. I am delighted to have won the awards and I will keep them in my trophy museum in Madeira”. 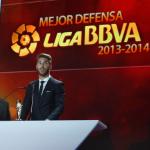