Goals by Cristiano Ronaldo, Pepe and Benzema cancelled out the visitors' opener and ensured a ninth successive win for Real Madrid.
Santiago Bernabéu

1
A spectacular reaction after going a goal behind with the game just started, a crowd fully behind its team, three goals and a footballing masterclass. They were the main talking points as Real Madrid overcame Barcelona by orchestrating a stunning ninth straight win. The encounter got off to an exciting and relentless start, with the home side forced to come back from behind. Neymar put Barcelona in front in the fourth minute, finishing off the away team's first threat on goal, but the Whites did not throw in the towel. After that moment the home side began a 15-minute spell of dominance during which they deserved to level the scoreline at the very least.

They were denied a rub of the green in the 11’. In the space of ten seconds Benzema headed the ball onto the crossbar and then followed it up with a rocket shot that smashed off the post. That was not to be his only attempt on goal. There was no let up and, after a fantastic Casillas save that denied Messi scoring into an open net in the 23’, Barcelona tried to hold onto possession. They managed to do so for a while until one of Marcelo's countless runs up the left wing ended with the Brazilian sending a cross towards the penalty area in the 35’ which Piqué, sliding on the ground, blocked with his hand. Cristiano Ronaldo converted the resulting penalty by sending Bravo the wrong way to equalise.

The half-time break came at 1-1, although the scoreline could have been different. After 44', James switched the play, Marcelo controlled and crossed the ball, and the Colombian, unmarked in the box, sent his header centimetres wide of the visitors' goal. While Barcelona had gone ahead after four minutes of the kick off, the roles were reversed in the second half when Real Madrid took the lead on 50'. Kroos delivered a corner kick and Pepe, rising imperiously, hit the mark with a header.

Third goal for Benzema in the last two matches
The match had changed, and even more so when the hosts' third arrived. The move began with a corner for the guests. The effort and faith shown by Isco, vying with two opposition players to chase down possession on 61', allowed him to win back a ball that had been given up for lost by everyone and begin a stunning counter-attack that was finished off by Benzema following a wonderful assist from James. The Whites again showed that no other team in the world has mastered this footballing art in the manner that they have.

Barcelona were undone, and further counters for Real Madrid did not bear fruit because Mascherano proved the away side's best player. An indisputable victory for the Whites and a footballing masterclass to end a week that will live long in the memory in the wake of comprehensive triumphs over Liverpool and Barcelona. Real Madrid roll on and on. 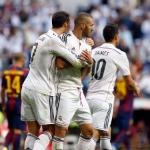