His brace sees him reach 15 goals after eight matchdays and beat a record stretching back 71 seasons. Strikes from Chicharito, James and Isco completed the victory.
Ciudad de Valencia

5
Real Madrid continue at full throttle as they prolonged their spectacular run of wins against Levante. At the Ciudad de Valencia, they made it seven in a row ahead of a testing week in which they face Liverpool at Anfield and play El Clásico at home. Far from offering early signs of rustiness following the international break, the Whites demonstrated their great form from the first whistle. Indeed, they were close to taking the lead as the ball was twice won back by Modric and ended in shooting chances for Cristiano Ronaldo on 2’ and 4’.

The visitors' next opportunity saw them open the scoring. Kroos fed a pass through the defence to Chicharito, who raced on to the ball in competition with Juanfran, and was clearly brought down in the area. Cristiano Ronaldo converted the penalty on 13' to seal his fourteenth La Liga goal. The encounter looked to be heading in Real Madrid's favour, but the equaliser could have arrived before the half-hour mark, as Camarasa connected with a corner on the penalty spot after 26'. Modric's timely block on the goal-line saved his side.

The minutes went by and Real Madrid grew more and more comfortable at the Ciudad de Valencia. All the indications were that they would reach the break with a one-goal lead, but on 38' they stretched their advantage. A measured cross from James and Chicharito, unmarked on the penalty spot, finished with a glancing header. Having already won the spot-kick for the opener, the Mexican's strike for the second sealed his status as the central figure of the first half.

Three works of art to complete the thrashing
In the early stages of the second half, Real Madrid came closer to getting a third than Levante to pulling one back. The move was started by Isco after 54', the midfielder producing a great pass in behind the defence. However, Mariño showed good reflexes as Cristiano Ronaldo shot before the ball had come back to earth.

Seven minutes later, a Madrid side enjoying itself at the Ciudad de Valencia made it three, with the same men taking centre stage. Isco won possession, launched the counter-attack, knocked the ball past Camarasa and fed Cristiano Ronaldo. What came next made it a memorable move. The Portuguese star shrugged off the attentions of Héctor Rodas, before neatly cutting inside Juanfran and beating Mariño to become the highest ever league scorer after 8 matchdays. A terrific goal and the ideal way to beat a mark stretching back over 70 years. Ronaldo continues to beat record after record.

The match was over as a contest, but Real Madrid wanted more - and hit their fourth. After 66', Kroos received the ball 30 metres from the area, looked up, saw the run of James and delivered the ball over the shoulders of the home defence. The Colombian controlled in the box with his chest, and volleyed past Mariño. The fifth came courtesy of Isco, who put the seal on an excellent display with a lovely strike from the edge of the area. Another thumping win, a second clean sheet on the trot for the Whites, and a competitive debut for Medrán. With a crunch week ahead, you can't ask for any more. Liverpool, at Anfield, and Barcelona, at home, await. Two opponents who will offer a stern examination of the team's current form. 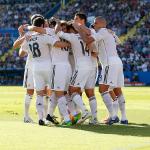