Winners of the Super Cup

The Whites saw off Barcelona in the final, claiming victory by a margin of 21 points.

Real Madrid showed their competitive spirit to win their first official trophy of the season at the Fernando Buesa Arena in Vitoria. Playing a balanced brand of basketball – intense at the back and brilliant in offence – and with the team's new signings adapting in record time, the Whites put on strong performances to beat Valencia Basket in the semi-finals (89-76) and Barcelona in the final (99-78).

Having just returned from their involvement in the Copa Euroamericana in Puerto Rico and Colombia, and just a few days after the official unveiling of Mexican centre Gustavo Ayón as a Real Madrid player, a side still coming up to speed for the new season shrugged off their fatigue to secure the club's third consecutive Endesa Super Cup and fourth in total, following those won in 1984, 2012 and 2013.

With averages of 18.5 points and 4 assists, Sergio Llull was chosen as tournament MVP. His contributions against Valencia (16 points) and Barcelona (he picked up 17 of his 21 points in a first half in which Real Madrid claimed a decisive lead) proved crucial. The man from Menorca succeeded team-mates Rudy Fernández and Sergio Rodríguez, Super Cup MVP winners in 2012 and 2013 respectively, as the tournament's top performer.

Valencia Basket did not make life easy for Madrid in the semi-finals, but the perimeter shooting of Llull and Rudy, combined with a fantastic purple patch from Felipe Reyes in the fourth quarter, ensured they reached their seventh straight final. And in the trophy decider against Barcelona, they put on a faultless display as an impressive 29-14 opening run set them on course for victory.

"We have to be competitive from the first day on and, in that sense, we have every reason to be very happy", acknowledged Laso. The 21-point winning margin against Barcelona was the largest in a final of the Endesa Super Cup in its current guise (since 2004). "We have to keep this up and look for more, because there are three more trophies up for grabs", stressed captain Reyes.

Winners of the Super Cup 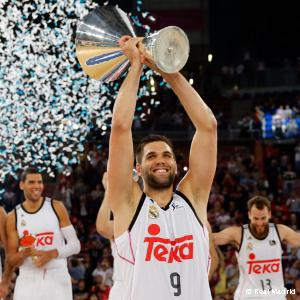 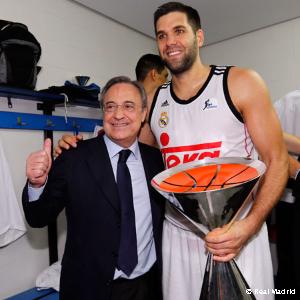