“Our brands are looking to strengthen their leadership and increase their global prestige", said Florentino Pérez.
The president box at the Santiago Bernabéu held the presentation act where an agreement between Real Madrid and the National Bank of Abu Dhabi (NBAD) was signed, which sees them become the club's official sponsor in the United Arab Emirates. First team players Bale, Kroos, Carvajal and Benzema were also present at the act where Florentino Pérez showed his satisfaction with the agreement: “We want to continue  being the world's best come. For this it is important for us to sign this agreement".

"Real Madrid establishes a strategic alliance with one of the world's most prestigious entities and the biggest and most important bank in the United Arab Emirates. Over the next three seasons we will share the same passion, wishes, goals, values and common objectives. Our brands will look to strengthen their leadership and increase their of global prestige".

“The image of Real Madrid today becomes linked to the image of the NBAD through its products and services in the United Arab Emirates. Their clients will for the first time have access to a credit card with all the prestige of both brands. This card sees them become holders of a Madridista card, or rather, one of the members of the big family that is Real Madrid".

Closeness to the United Arab Emirates
"I know that each match is lived with a special emotion and that the link with the UAE makes it better. This agreement will help the club to conquer the hearts of followers in the United Arab Emirates. We will become even closer to them. I hope that this alliance for the next three years can become a permanent thing".

Gifts
In addition to Florentino Pérez and the first team players, Alex Thursby, the CEO of NBAD and Abdulla Al Otaiba, Executive Director of the Consumer Bank of the NBAD were present. Florentino Pérez offered a replica of the Bernabéu and a Real Madrid shirt, and in turn received a miniature jewellery boat.

Thanks from the NBAD
Alex Thursby also showed his delight with the agreement: "it's very important for our bank and our future aspirations. It is a day of pride for Abu Dhabi in general".

Finally, Abdulla Al Otaiba said: “this union will strengthen both international institutes. It is the first time that a bank from the United Arab Emirates has created such a situation, which is not just a product but also a joint brand". 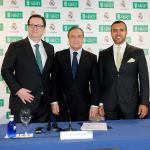