Bale scored the remaining Whites goal against Elche, who took the lead but had no answer to a team on fire.
Santiago Bernabéu

1
Onwards and upwards for Real Madrid. Against Elche, the Whites demonstrated the fine form they are in as they served up another exhibition of their immense bite in attack - despite suffering a setback as the first quarter of an hour came to an end. Cristiano Ronaldo sought to clear in the area and, as he went to strike the ball, Mosquera appeared and got a leg in ahead of the Portuguese. Clos Gómez pointed to the spot, and the penalty was converted by Edu Albacar.

The visitors' joy did not last for long. Just five minutes. A measured cross from James on the right wing and Bale took advantage of the curl on his team-mate's ball to get in front of the visiting defence and beat Manu Herrera with a header. The goal saw the Welshman, who has scored in the last three matches, continue his excellent form.

Real Madrid were the dominant side, and were out to get in front. Before the half hour was up, they did just that from the penalty spot. Marcelo was brought down by Mosquera in the area on 27' and Cristiano Ronaldo, who doesn't miss from 12 yards, made history as he became the first Real Madrid player to score in 13 consecutive home La Liga games. The hosts, having now completed the hardest part, extended their lead four minutes later with the same players to the fore. Marcelo crossed from the left, and Ronaldo rose highest to seal his second of the night with his head.

The Whites were putting on a whirlwind display as Elche were helpless in the face of the attacks coming from the home side, who would have gone into the half-time break with a healthier cushion had it not been for the performance of Herrera. Indeed, the visiting goalkeeper came to his team's rescue in two moments that came practically one after the other. He took no chances as he pushed away a powerful Cristiano Ronaldo free-kick after 37' and a minute later stretched impressively to save a Kroos shot from the penalty spot.

Seven goals in the last two matches
The second half was all about the hosts. The Whites controlled the rhythm of the game, but time and again came up against Manu Herrera, who pulled off a terrific stop from an indirect free-kick by Cristiano Ronaldo after 66'. On 80', he was unable to repeat the feat. Pasalic clearly brought down Ronaldo in the area, and the Portugal man netted the spot-kick to increase his lead at the top of the La Liga scoring charts.

It did not prove to be the final goal of the night. The crossbar prevented Kroos from scoring his first goal for Real Madrid after 84', before Cristiano Ronaldo scored with the outside of his boot to claim his fourth of the match in time added on. A third goal fest on the trot for an on-fire Real Madrid. 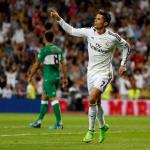