A Suchý own goal as well as goals for Bale, Cristiano Ronaldo, James and Benzema sealed the victory over Basel.
Santiago Bernabéu

1
Real Madrid got off to the best possible start in their mission to defend their title in the continent's elite competition and become the first club to successfully hold onto the title since the Champions League format was introduced. The Whites were rampant in front of goal against Basel in a match that was over in little over half an hour and now they top the group.

From the beginning they were the dominant side and were eager to please their fans. In fact, the Whites made it 1-0 within the first fifteen minutes. Nacho, who started as right back, linked up with James, the Colombian returned the ball with a back heel and former youth academy player's resulting cross deflected off Suchý's hand and caught Vaclíck off guard. That was not Real Madrid's first chance on goal. Modric and Cristiano Ronaldo had already tried to open the scoring.

The most difficult task was now complete, but Real Madrid wanted more. Modric got the best out of Vaclíck in the 26th minute with a fantastic shot from 27 yards out and kick started a spell of pressure that finished in three goals, of which the first two were particularly special.

Spectacular assist from Modric
The Croatian was at the centre of Madrid's second goal. His cross with the outside of his boot in the 30' gave Bale a one-on-one with the keeper, who the Welshman got past with a beautiful chip and then fired the ball into the back of the net before it could land on the goal line. Real Madrid needed hardly any more time to kill off the game. Just one minute. Bale set up Cristiano Ronaldo from the right and the Portuguese man gratefully finished off the counter-attacking move.

The Madrid players were enjoying themselves and ensured that their fans were too, grabbing a fourth just five minutes later. Cristiano Ronaldo cut the ball back in the box to set up Benzema. The Frenchman's shot was diverted away from goal by Vaclíck, but an alert James got ahead of the defenders to get his first goal in the competition as a Real Madrid player. González shortened the lead in the 38'.

Both teams had chances after the break. Kakitani just had Casillas to beat and the home side's captain came out on top with a great save to receive an ovation from the stands. Four minutes later it was the away team's keeper who shone after denying Bale in one-on-one situation.

Benzema put the cherry on the cake
Benzema made no mistake and finished off the goal fest in the 79' with a spectacular finish. A Cristiano Ronaldo back heel found the Frenchman, who passed the ball back, the Portuguese forward returned the ball once again and Benzema controlled it expertly before blasting it into the net with his left foot. The manner with which the ball crashed off the cross bar and left the keeper stranded before going in was a thing of beauty. A good night in front of goal which finished with the current Champions League holders topping their group. 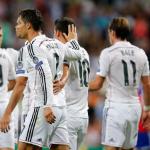