2
Real Madrid are firmly on course and are in no mood to veer off it. The Whites overcame a demanding test at El Madrigal, sealed their fourth consecutive victory in little more than a week and also kept a clean sheet in a match that began in vibrant, high-paced fashion. With five minutes on the clock, Madrid had already had the ball in the net. However, the strike was ruled out for a Ramos handball after the defender had finished low in the area on a set-piece. Uche responded two minutes later, Casillas diving well to prevent the hosts from scoring.

It was an end-to-end affair, and when it comes to an exchange of blows, the Whites are unerring - and showed their relentless cutting edge. A long passage of play, involving more than 20 consecutive touches without their opponents winning the ball back, ended up at the feet of Modric, and the Croat hit a perfect, right-footed shot from the edge of the area to put his side ahead in the 32nd minute, in a demonstration of his expertise from distance.

Eight minutes later, Madrid scored their second goal through a footballing art that they have mastered better than anyone: the counter-attack. James began the move with a long pass in behind the opposition defenders, Benzema raced on to it and into the area in competition with Víctor Ruiz, cut inside and laid the ball to Cristiano Ronaldo, who finished in space from the penalty spot. The goal saw the Portuguese star, who is out on his own at the top of the La Liga scoring charts, claim his tenth league strike of the season.

With a commendable double stop by Casillas from Trigueros and Vietto after 42', a prodigious block by Marcelo from Trigueros' shot from the penalty spot in the following piece of action, and a good save from Asenjo to keep out Marcelo's effort from 30 metres, an attractive first half came to an end - one in which Madrid had given another exhibition of their immense bite in attack.

Clean sheet
The script did not change significantly in the second half, despite no goals being scored. Two brave teams (Villarreal had already made their three substitutions after 67') and constant attacks on both penalty areas. Real Madrid, with Casillas putting in an excellent, disciplined performance, were able to keep their opponents' attacks at bay and were even close to making it three on several occasions. The Whites end September with four consecutive victories and now turn their attentions to their first away assignment in this season's Champions League. 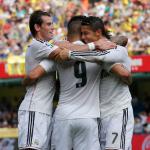