Cristiano Ronaldo decides matters in Cardiff with two goals against Sevilla to earn the Whites the first of the six titles up for grabs this season.
Cardiff City Stadium

0
Everything went perfectly in Cardiff City Stadium. If the script were presented to any Real Madrid fan before the match, they would have agreed to it. The Whites defeated Sevilla 2-0 with a Cristiano Ronaldo brace, won their second ever European Super Cup title and once again displayed their superiority on the continental stage. As well as that, the match saw Kroos and James - two of the reinforcements brought in for this season - make their debuts. The season could not have gotten off to a better start. The first title of the season is now securely in the club's trophy cabinet. There are five more to go.

Very early on, in the fourth minute, Real Madrid had their first chance on goal. A Ronaldo shot from outside the box was comfortably saved by Beto. The next two chances came from the left wing. James intentionally played a low cross into the box, but Bale, who sprinted 30 meters to get on the end of it, saw his shot blocked by Pareja in the 18’.

Four minutes later Coentrão put the Sevilla keeper under the cosh with a cross/shot that forced Fazio to clear the ball from the line with his head.

That was Madrid's best spell of the game, with the Whites' best chance of the game up until that point coming in the 26'. Benzema, who found himself on the right, controlled the ball and laid it off for Ronaldo. The Portuguese man's touch to get one-on-one with Beto was magnificent, but the keeper was quick to react to the danger.

A goal was on the cards and it eventually came on the half hour mark. Once again the left wing was key. Bale crossed the ball to the far post and the Golden Boot was at hand to send it into the back of the net. Everything was going to plan and an incredible save by Casillas to deny Carriço in the 35’ ensured that the Whites went into the break with the lead.

A decisive start to the second half
The Whites were in devastating form at the beginning of the second half. They only needed four minutes to double their lead. Once again the Benzema-Cristiano Ronaldo partnership worked well with the Portuguese getting his second of the night with a thunderous left-footed strike. The European Super Cup crown was becoming even more of a reality.

From then on there was little else in the way of action. The Real Madrid players looked more and more comfortable as the match went on and it was more likely that they would get a third than concede from a Sevilla effort on goal. Chants of “Champions, champions!” were heard around Cardiff Stadium. And for good reason. Real Madrid have started this season as they finished the last: with a European title. Congratulations! 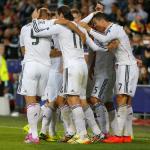 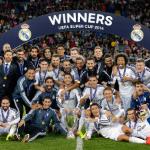