The two goals, one in each half, give Real Madrid the first three points of the season against a brave Córdoba.
Santiago Bernabéu

0
Real Madrid have started the Liga with a victory. The Whites defeated Córdoba after goals from Benzema and Cristiano Ronaldo and start their championship campaign by notching up three important points. The dominance of the home side was notable from the start, but after 20 minutes of play it reached the point that their opponent practically did not show up in the first half.

After half an hour of play, and from the Whites’ fourth shot on target (Kroos, Cristiano Ronaldo and James had previously tried their luck), came the first goal. The German took a corner and Benzema rose above the defence to head home and open his personal account for the season.

The hard work was done. Now it was time to pull away after the break. James came close to doing so when the clock read 60. Kroos took the corner and the Colombian latched onto it before shooting from the penalty spot, however, he was met with a perfect demonstration of Juan Carlo’s reflexes. Ten minutes later Córdoba scored, but the goal was disallowed because Xisco was clearly offside.

It was not the only goal overruled by Gil Manzano. A spectacular through ball from Modric after 87 minutes and a great finish from Cristiano Ronaldo did not count because the Portuguese was also ruled to be slightly offside. However, he managed to make the score-sheet two minutes later. Isco won the ball back and Cristiano Ronaldo finished the job from outside the box. The Whites collected three important points in their championship opener. 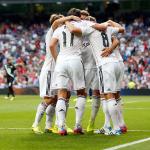