The Whites were greeted by more than 500 fans outside their hotel.
Real Madrid is now in Dallas. After more than three hours of flying, the Madrid expedition landed in the Landmark terminal of the Texan city's airport and then made its way to the Ritz Carlton hotel, where the players were greeted by more than 500 fans. The hotel will be the team's base ahead of the second match of the pre-season, which is against Roma (29 July at 20:40 local time, 30 July at 03:40 CET). 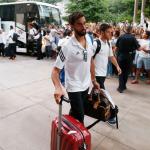