“Your great performances in recent weeks are confirmation that we had chosen the right player”, stated Florentino Pérez.
Toni Kroos has been presented as a new Real Madrid player. Amid a great deal of expectation, the Santiago Bernabéu’s president’s box hosted the presentation of the German as a Whites player. The first signing for the 2014/15 season has joined the European champions after winning the World Cup in Brazil and he will wear the number 8 on his back.

The event started with a video of Kroos’ best performances. By his side was the president, Florentino Pérez, who took the floor, firstly to remember Alfredo Di Stéfano: “Today we are missing someone who has been with us in these presentations for the last 14 years. It will not be easy for us to get used to living without Alfredo Di Stéfano. We know he will be with us eternally and I’m sure he would be enthusiastic about this signing”.

The president was full of praise for Kroos: “Today is a very happy day for our club. A magnificent player has arrived, as he showed at the World Cup, where he was one of the best in the competition. His great performances in recent weeks do not come as a surprise, but as confirmation that we had chosen the right player. This shirt is very demanding. Dear Toni, welcome to Real Madrid”.

“An extraordinary player has arrived, who topped the FIFA ranking, where he is recognised as the most complete player. He is a very young player with an impressive list of honours. He comes with experience from a championship winning team and from a club with have a good relationship with. I’d like you to know that you will receive great affection from all the members and fans of Real Madrid”.

“Two months ago we were celebrating the Décima but Madrid fans always want more. You have come to help make this club bigger and you should know that all Real Madrid fans are already dreaming of an eleventh European Cup. From this moment, this stadium is you and your people’s home”.

“I know it’s a requirement to win titles here, but this is motivation for me and I think I’m the right man for that. In 2012 I won the Champions League, in 2013 Madrid did it and I’d like to win it again this year. I hope to fulfil that. I’m going to give my all for the club and its fans. Hala Madrid!”.

The event closed with a photo of the new Whites player together with Florentino Pérez and the rest of the Board of Directors. The fans were enthusiastic about the signing and chanted his name throughout the event. 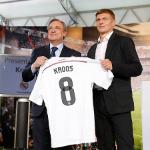