After joining the Alevín A team in 2001, and later playing in all teams in the lower ranks, two seasons ago he joined the first team.
Nacho Fernández will be at Real Madrid for six more years. The Madrid native is the perfect example of an academy player. 13 years ago he joined the Alevín A team in La Fábrica and after passing through all the categories in the lower ranks he joined the first squad. The 24-year-old defender has won one European Cup (the Décima), one Copa del Rey and one Supercup of Spain with Real Madrid.

He made his first-team debut on 23 April 2011, in the win over Valencia in the Mestalla (3-6). After several appearances, he became a fully-fledged Real Madrid player two seasons ago. Last season he played 19 matches (12 in La Liga, 3 in the Champions League and 4 in the Copa del Rey).

Nacho is a home-grown footballer who was brought up on the values of Real Madrid. His natural position is in the centre of the rear-guard but he is a versatile player. He can play anywhere in defence and always delivers. He is known for his pace, nerve and solid challenging, qualities that earned him a debut with Spain against Chile in Geneva on 10 September 2013. 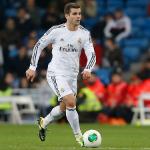