The public viewing was a constant recognition of the Real Madrid legend's life.
The Santiago Bernabéu hosted the open casket with the mortal remains of Alfredo Di Stéfano. Thousands of fans visited the president’s box to show their respects to the ex-Honorary President of Real Madrid. A wall set up in gate 43 of the stadium is covered in dedications and farewell messages to the greatest footballer of all time.

In addition, several people have left their memorabilia near the coffin, such as photos with dedications, balls, scarves, flowers and banners. Several of the most important trophies that the player won with Real Madrid stand over the coffin: the five European Cups, the Ballon d’Ors, the Super Ballon d’Or and the Intercontinental Cup. Next to the trophies, dozens of bouquets of flowers from all over the world can be seen. 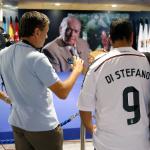