Bale put the Whites ahead with a great goal from 30 metres, but a penalty conceded by Sobrino and converted by Icardi took the game into a shoot-out, which the Italian side won.
California Memorial Stadium

1
Real Madrid started the 2014/15 season with a draw against Inter Milan. The first half belonged to the Whites, who demonstrated at the University of Berkeley's California Memorial Museum the hallmarks that made them champions of Europe: a possession game and suffocating pressure to recover the ball in front of a crowd that were right behind Ancelotti's team.

In fact, the match took a turn very early, on 10 minutes, although the first goal could have come even earlier. A cross from Carvajal from the right and a headed shot from Bale hit the crossbar. It was a warning of what was to come. The Welshman controlled the ball in the midfield, went forward with it stuck to his foot and surprised Handanovic with an unstoppable missile from 30 metres. There was little the Italian team's goalkeeper could do against the surprising effect that the Welshman achieved with his strike.

Bale was showing that he is starting the season in exceptional form and came close to bagging a brace after half an hour's play. His long-distance free kick was deflected for a corner by Handanovic. It was the last dangerous play of the first half, in which the Whites showed great solidity on the field and their opponents barely threatened their goal.

Decided on penalties
At half time Ancelotti decided to bring on Jesús and Marcos Llorente for Diego López and Bale, who was the most outstanding player in the first half. The match took a turn for the worse in the 68th minute when the referee gave a penalty for a Sobrino push on Vidic, who was about to shoot following a cross from Jonathan from the right. Icardi converted it to equalise the game.

The match opened up. It was end-to-end stuff. Jesús showed off his reflexes with an impressive double save in the 78th minute, stopping shots from Juan Jesús and Andreolli, but six minutes later it was the Whites' turn and Omar forced Carrizo to make a great save with a shot from in front of the box. The time was up and the penalty shoot-out was won by the Italian side. 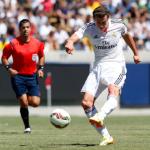