The Castilla striker went on in the 69th minute of the match against Celta.
Castilla striker Willian José made his official Real Madrid debut in the game against Celta on matchday 37 of the Liga BBVA. The Brazilian went onto the field at the Balaídos Stadium in the 69th minute in place of Casemiro and became the first player from the reserve team to make his debut in an official match with Ancelotti in the dugout. 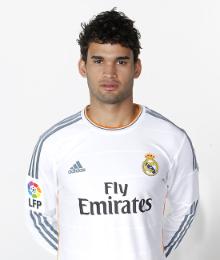