Real Madrid come into the Champions League final as the competition's top goalscorers (37) and with a record of 10 victories, one draw and one defeat.
Ancelotti's team reach Lisbon after a stunning European campaign. Real Madrid are in the final after 10 victories, one draw and one defeat. Their 37 goals make them the most prolific goal-scoring team in the competition and beat the previous club record in the European Cup. One man stands out in front of goal; Cristiano Ronaldo, and his haul of 16 goals is also a new record in the competition.

The Whites topped Group B ahead of Galatasaray, Juventus and Copenhagen. Their only stumble in the six matches there was a draw in Turin and they averaged 3.3 goals per game. The Whites found the net more times than in any other Group Stage in their history and Cristiano Ronaldo became the first player ever to score nine goals there.

Three knockout ties against German sides
In order to get to Lisbon, Real Madrid had to beat the top three sides from the Bundesliga. In the last 16, Schalke were the defeated opponents, with victories for the Whites both home and away. The 1-6 win in Gelsenkirchen, with doubles from Ronaldo, Benzema and Bale will be remembered in history. In the quarters, revenge was extracted against Borussia Dortmund. The 3-0 win at the Bernabéu was sufficient to get through to the semi-finals.

A show of authority against Bayern
The tie against Bayern Munich showed the potential of Ancelotti's side. Benzema gave Real Madrid the advantage in the first leg (1-0), before the magic night at the Allianz Arena. The 0-4 win at Bayern's ground has gone down as one of the club's greatest ever nights. The braces from Ramos and Cristiano put the Whites into the final in style. 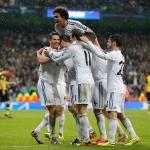