“I'm proud, this is a unique and special moment for me”, said Real Madrid's vice-captain.
Sergio Ramos is the man of the moment. Real Madrid's vice-captain has just finished the season of his life. And he has done so in style, with that historic header that enabled the Whites to win the Décima. On Friday he received some well-deserved recognition in his home city. The Council of Seville presented him with the city medal for his contribution to and promotion of sport. The event, which took place at the Lope de Vega Theatre during the local San Fernando festival, was attended by Emilio Butragueño, the director of Institutional Relationships at Real Madrid.

The defender received the accolade for “for displaying the best human and sporting values and taking the image of Seville around the world. Sergio, how could we not love you?”, said the event's spokesperson. The mayor of the city, Juan Ignacio Zoido, was responsible for presenting the medal to the Whites player, who was visibly moved: “I'm very proud, this is the most important prize. I should never forget who I am and where I'm from and this is a unique and special moment for me”, he stated.

The highlight of his career
“I've had some great experiences this year, becoming a father among them, which is one of the happiest things in my life, and winning the Champions League, which is an added bonus to round the year off. Given my experiences, I would say that this is the most important time of my life and I love it. I am happy to be a father and then to have had a great season; and it helps you grow emotionally”.


“I'm not worried about individual prizes, it's nice to have your work recognised but only if the team rewards come. From there you can benefit individually. It's never been on my mind, it's not my goal. My goal is to maintain my standard of play and to have a great World Cup”.

Future captain
“At the moment there are other captains and we respect that. We all have our role in the dressing room, both at Real Madrid and in the national team. When it's my turn and I am asked to be captain I'll be delighted to do it. Now I really respect the current captains”.

Among the 20 names to receive city of Seville medals were ex-Real Madrid player Rafael Gordillo, who was full of praise for Sergio Ramos: “He's having a great career. I've always thought he was very strong. When he started with Madrid we knew he could be another Fernando Hierro. He's grown and he still has a really long time left. I think he's one of the best centre-backs in the world”.

With the fans singing his name, images of the player's career were displayed on the digital scoreboard under the title: Sergio Ramos, uno de los nuestros (Sergio Ramos, one of us). 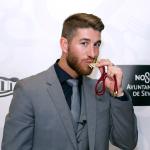