“It will be a great match involving legendary players with the objective of irradiating injustice”, said the Real Madrid president in reference to the upcoming match between legendary players from the Whites and Juventus.
Florentino Pérez was in attendance at the presentation of the Unesco Cup, which will see the Juventus Legends take on the Real Madrid Legends on the 2nd of June, at 6:30pm. The ceremony took place in the Juventus Stadium, where the charity match will be played. All the money raised for the friendly game will go towards reintegrating child soldiers to society in Mali and the Central African Republic.

The Real Madrid president highlighted the importance of this charitable event: “These two clubs are standard bearers in the world of football. Our titles and sporting achievements have cemented our legendary statuses, but at the same time we have a big responsibility. Juve and Real Madrid are two teams that symbolise all that is good about sports but they should also represent a commitment to charity and helping those in need”.


“It will be a great match involving legendary players with the mission of irradiating injustice. On the 2nd of June the Juventus Stadium will look to reintegrate child soldiers - who have suffered through conflicts in Mali and Central Africa - into society. We cannot ignore them because Africa loves football and we all have a responsibility to help the continent. It will be a day in which football does its part for charity”.

As well as the president, the Whites were also represented by Emilio Butragueño, the club's director of institutional relations, and Fernando Hierro. Andrea Agnelli, the Juventus president, and former players Davids, Grosso, Nedved and Pessotto represented the Italian club at the event, which was also attended by Eric Falt, Unesco's director general for external relations and public information. Both these clubs met in last year's Corazón Classic Match. 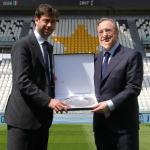