A Bale goal and a Morata brace sealed the win against Espanyol one week ahead of the Champions League final.
Santiago Bernabéu

1
Real Madrid bade farewell to the Bernabéu with a victory in a match in which three of the four goals were scored during the last five minutes. The first half ended scoreless, despite the fact that the Whites completely dominated the play, as the statistics clearly pointed to. They had 72% possession and created all the danger. The first chance came in the 13th minute when a Marcelo cross found Benzema at the far post, but his header went over the bar. Real Madrid had another opportunity nine minutes later. Di María picked out Ramos with corner and the defender beat Javi López before shooting with his left, however, Casilla was at hand to save it.

The Whites began to attack ever more frequently and once again Ramos had a chance to put the home side ahead from another corner. The center back struck a volley from outside the box in the 28th minute, but the ball flew just centimeters wide of the Espanyol goal. Despite all that, the clearest chance came on the half hour mark. Benzema robbed the ball off Javi López, and then beat David López but Casilla, who once again shone, cleared his shot. The away team's goalkeeper ensured that the Catalans went into the break all square.

Espanyol were braver in the second half. But they left spaces and Real Madrid took advantage of them to create even more danger and take the lead. Ramos, who joined the attack wisely, shot high from in front of the box before Bale opened the scoring in the 65th minute. Benzema received a pass and provided a great assist for the Welshman, who controlled the ball with the outside of his foot and hit an angled strike with his right.

Injuries up front
The Whites had already found the net, but bad luck hit Ancelotti's squad. First Christiano Ronaldo could not start after withdrawing from the warm-up, then Benzema had to be replaced in the 68th minute with a problem in his left leg.

Morata was the perfect replacement for the Frenchman and in the 86th minute he extended their lead. Ramos began the counter-attack, Di María provided the assist with his right foot and the academy player fired at will. The match lit up. Pizzi scored the visitors' only goal in the 90th minute and a minute later Morata scored his second.

Another Di María assist
The move was a carbon copy of the one that ended in the second goal for the home side and was another demonstration of the Argentine's generosity. The Whites said farewell to the Bernabéu with a victory and their sights are now set on the Champions League final against Atlético. 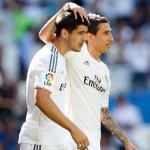