Thousands of people welcomed the team to their hotel in the German city.

Real Madrid have arrived Munich. The group, which was headed by club president Florentino Pérez, landed at the Franz Josef Strauss airport after a flight of nearly one and a half hours. The Whites then made the trip to the Hilton München Park, where they were welcomed by a thousand fans. They will stay there until the start of the second leg of their Champions League semi-final against Bayern Munich on Tuesday (20:45). 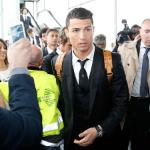