The players began their celebrations in full view of the fans in Mestalla the second the referee whistled for full time. After Casillas had lifted the Cup towards the Valencian night sky and the team posed for photos with the trophy on the pitch, it was time to move the party to the dressing room. The players were in buoyant mood as they popped open bottles of champagne and took photos of each other with the trophy.

On top of that, they made sure to include the only player from the squad who was unable to travel to Valencia: Jesé. Sergio Ramos rang the Canary Islander from the dressing room so he could also join in with the title-winning celebrations. 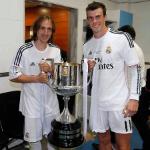