Di María's goal as well as a cracking finish by Bale, after a wonderful bit of play, were enough to defeat Barcelona and earn Real Madrid their 19th Copa del Rey title.

2
The will and desire to delight the fans outweighed the fact that a number of important players were missing. That is what Real Madrid displayed in Mestalla, as the team was once again victorious, picking up the 19th Copa del Rey title in the club's history at the end of what will go down as a legendary encounter. The team from the Spanish capital got off to a flying start. Within 10 minutes they had taken the lead and had also created another two clear goal-scoring opportunities, the only real chances in the game up until that point.

Bale was the first to try his luck, but his shot in the 5' was fired across the face of goal before going wide. The Welshman was once again at the centre of things a minute later when another of his efforts came off Mascherano. The first two attempts on goal proved an effective warm-up act as the Whites found the mark with their third. Isco picked up the ball in the centre of the midfield to start a spectacular counter-attacking move in the 10'. From there the ball travelled between Bale, Benzema and Di María, before the latter finished off the move by firing the ball low past Pinto.

Real Madrid were now in control of the game and knew that the less time the opposition had on the ball, the fewer chances they were likely to create. In fact, the first and only Barcelona shot on target during the first half came in the 23' when Alba's headed effort was easily dealt with by Casillas. The praise for the Catalans' lack of creativity belonged to the Real Madrid defenders, who did not give their rivals an inch of space. The Whites defended tightly and could have gone into the break with an even bigger lead had their finishing in front of goal matched the slickness of their counter-attacking moves, which time and time again caught the blaugrana off guard.

There was little else the Real Madrid fans could ask of their team and the Whites began the second half in much the same vein. Just like at the beginning of the match, Bale was the first to shoot during the second half. An excellent bit of individual play in the 48' saw him beat two players, however, his effort was off target. That was Real Madrid's best period of play, and in the 67' they had another chance to widen the gap within the sides, but Benzema was denied by Pinto at the near post.

Bale decided the match with a moment of genius
It looked more likely that Real Madrid would double their lead than Barca finding an equaliser, but Bartra headed home from a corner to make it all square in the 68'. Ancelotti's men were unlucky to concede with twenty minutes left on the clock.

The suspense was eased thanks to a stunning piece of play from Bale. A goal, much like the one scored on the same stage three years ago by Cristiano Ronaldo, will go down in the history books for it's importance the beautiful manner in which it was executed. The Welshman controlled the ball on the left wing and with an incredible burst of pace left Bartra in his dust as he raced goalwards. Nothing could stop the Real Madrid player, who dealt with the onrushing Pinto with a clever finish under the Barcelona keeper's legs in the 85'. All done at a blistering pace. Real Madrid wins the first title of the season. Cup Champions! Congratulations! 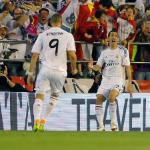 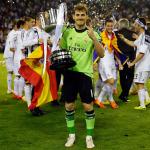