Benzema's goal and a solid performance from Ancelotti's men were key to the victory over Bayern.
Santiago Bernabéu

0
Only one match stands between Real Madrid and the final of the European Cup. It will take place next Tuesday in the Allianz Arena and the Whites will go into it with the advantage of Benzema's goal, the added bonus of not having conceded at home and with its mind set on going to Germany and finishing off the excellent work it started in the Spain's capital.

With the Bernabéu faithful behind their team as soon as they arrived at the stadium, the Whites were solid and united in defence, direct going forward and they also demonstrated their immense fire-power. The first home shot on goal ended up in the back of the net. The move started on the left wing. Coentrão overlapped Cristiano Ronaldo and the Portuguese full-back's low ball across the box was tapped in by Benzema when the clock read 19.

The hard work was now done. Bayern, who set out intent on dominating possession, began to struggle and leave spaces on the playing field, particularly behind Rafinha, and the Whites were alert enough to notice. In fact, they could have bagged a second before the half-hour mark. Benzema nipped in behind the German team's right-back, crossed and Cristiano Ronaldo found himself alone in front of goal, only to shoot over the bar in the 26th minute.

The final chance of the first half came on the same wing, Real Madrid's left and Bayern's right. Coentrão caught the German's off-guard once more and his cross was met by Di María, who brought the ball down with his chest and fired a half volley over the bar in the 41st minute. The Whites were dangerous on the counter and the Germans went into the dressing room feeling helpless against the home side's rapid advances.

The Whites threw everything into the match
Real Madrid began to press after the break, and the pressure they applied up front counteracted the possession of the visitors. Ancelotti's plan was bearing fruit. In the space of 25 minutes Bayern had no shots on goal compared to two dangerous efforts from the Whites, both of which came from the boots of Cristiano Ronaldo. The first, a shot across the goal, which forced Neuer to dig deep after 47 minutes, while the second was sent behind for a corner by the German keeper in the 68th.

Pepe, who left the pitch with a niggle, and Cristiano Ronaldo made way for Varane and Bale respectively after 73 minutes. There were no more goals, but there was time for Casillas to shine in the 84th minute when faced with a point-blank shot from Götze. The image of Coentrão on the ground being treated by the club's medical staff when the match was over was the clearest sign that the Whites had given their all to seal a deserved victory against the European champions. 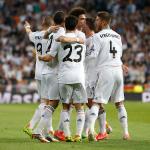