Cristiano Ronaldo's brace and a goal from Morata closed out a brilliant tie against Schalke, with an aggregate score of 9-2; Jesé's injury was the only sour note of the night.
Santiago Bernabéu

1
The Champions League was back in the Bernabéu after an absence of more than three months with a tie that Real Madrid had practically sewn up with its historic 6-1 victory in Germany. It was an eventful start to the game as Jesé had to withdraw with an injury after 5 minutes and was replaced by Bale. The Welshman was at the centre of the move that created the first goal in the 21st minute. Morata brought the ball under his spell on the edge of the box with his back to goal, made space and found Bale, who in turn set up Cristiano Ronaldo. The Portuguese found the back of the net for yet another goal in the competition.

Just as in his last two matches for his team, Cristiano Ronaldo had opened the scoring once more, but Schalke were lucky to level the match when the clock read 31. Hoogland shot, the ball deflected off the boots of Ramos, wrong footing Casillas. From then on the first half was an end-to-end affair and, despite the fact that there were no more goals before the break, both sides had some great chances in front of goal. Morata and Huntelaar were unable to convert their one-on-ones.

Real Madrid wanted to put on a show for the fans and came out dominating in the second half. In fact, in the first ten minutes, they had two notable chances to take the lead, and there should have been a penalty for a clear foul on Morata, but the referee did not give it. Cristiano Ronaldo had the first, but Fährmann dug deep to keep his header out after 51 minutes. The second came in the 54th, when Isco produced a moment of brilliance by feigning his way past two visiting defenders, but the German shot-stopper was up to the task once more.

In the space of two minutes Real Madrid put the match to bed. Cristiano Ronaldo's spectacular run with the ball sticking to his feet in the 74th minute and an even better finish made him the fourth top goal-scorer in the history of the club and gave him his thirteenth goal in the competition. He could even have bagged a hat-trick in the next move, but he hit the crossbar. Bale latched onto the rebound and found Morata, who finally got his just deserts for his hard work throughout.

It could have been an even bigger victory if Ronaldo had not hit the post in the 83rd minute. The Whites are through to the quarters in style, with an aggregate score of 9-2. On Friday they will find out who they will meet in the next round. 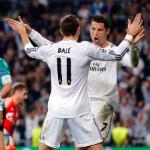