Goals from Cristiano Ronaldo, Marcelo and Nikos (OG) sealed the side's 21st win in the league and Real Madrid are now three points ahead of Atlético and four in front of Barcelona.
Santiago Bernabéu

0
Real Madrid refuse to let up in the league, and they increased their lead over the sides behind them. Last week they were one point ahead of Barcelona and three in front of Atlético, whereas with this win over Levante they remain three points ahead of their city rivals, whilst they hold a four point advantage over the Catalan side. The Whites dominated from the off, playing with a spectacular rhythm during the first quarter of an hour, surpassing the Valencian side.

Cristiano Ronaldo volleyed at goal in the sixth minute, but Keylor Navas'  save kept the scoreline level. Five minutes later the Portuguese didn't miss. A corner that was taken by Di María was met by the league's top scorer, who rose above everyone before beating the visiting goalkeeper with a fine header.


The Whites had already scored once and the fact the scoreline didn't read more heavily in their favour before half time was largely due to Navas, who shone against Di María and Benzema. The Costa Rican arrived at the Bernabéu with the reputation as a top goalkeeper, and his performance in the first half only accentuated that. The stopper managed to touch Benzema's header from Marcelo's inviting cross onto the post when it looked for all the world as if it would be a goal.

The woodwork prevented more goals
The Madrid side had needed 11 minutes to get themselves in front in the first half, but they only need four in the second half to double their advantage. The play deserved it. Cristiano Ronaldo combined with Marcelo and the Brazilian showed excellent feet before finishing precisely with his right foot. The league leaders were like a gust of wind and Benzema might have scored the third, but Navas' reflexes were too good and he kept the effort out.

Levante, who were very organised, were reduced to 10 men when David Navarro was sent off in the 64th minute, and Benzema, as in the first half, hit the woodwork eight minutes later. Ancelotti's gameplan from dead balls worked once more, and the Frenchman sent his header on to the bar.

There was still time for one more goal, scored by Nikos in his own net in the 81st minute. Marcelo centred the ball and the Greek, under no pressure, sliced the ball into his own goal as he attempted to clear. A fourth might have come, but the bar denied Cristiano Ronaldo in the 89th minute. Three goals and three shots against the woodwork. An important win and Real Madrid are the only side to be unbeaten in the second round of Liga fixtures. 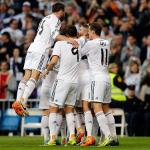