A goal from Cristiano Ronaldo, who has now scored in his last five matches, gave Real Madrid, who have now gone 30 games unbeaten, all three points.
La Rosaleda

1
Real Madrid only have four more away fixtures left in this La Liga campaign after beating Málaga in La Rosaleda. The Whites remain top of the table and continue to put pressure on the teams competing with them in the title race. The match was very open to begin with, and had plenty of controversy early on. The visitors' first real attack ended with Bale being taken down by Angeleri inside the box just as he was about to shoot in the sixth minute. A clear penalty shout that Martínez Munuera didn't blow for.

The second real chance also fell to the Whites when a Cristiano Ronaldo shot was saved by Willy Caballero. The best player in the world made no mistake eleven minutes later with his next opportunity. Receiving the ball inside the box at a tight angle, he made space for himself with a subtle touch with the outside of his right foot before blasting a shot with such force that the Argentine keeper couldn't get close to preventing the opening goal. This is the fifth match in a row in which the Portuguese forward has scored for Real Madrid. Although the most difficult thing was out of the way, there was still plenty of time left on the clock.

Despite everything, the best chances kept falling to the visitors, who could have doubled their lead, but Willy Caballero was at hand to save a Cristiano Ronaldo volley with his left leg in the 25th minute. On the half hour mark Ancelotti was forced into making a substitution. Di María replaced Benzema, who had to come off after knocking into Cristiano Ronaldo. It was the Portuguese man who had the last clear chance of the opening half. A long ball from Marcelo found Di María, who crossed it first time to set up Cristiano, however, his header went just wide of the mark.

Second clean sheet in a row
Málaga, with home advantage, looked to squeeze the game at the beginning of the second half. The Whites withstood the onslaught for the next six minutes and could have widened the gap with their first chance on goal after the restart. A spectacular run by Di María, who dribbled the ball from one side of the pitch to the other and left three players in his wake, ended with the South American finding Isco, who just had the keeper to beat. However, the Whites' midfielder sent his shot over the bar in the 51st minute.

The clock ticked on and it looked more likely that Real Madrid would hold onto all three points to strengthen their title hopes. There were a few nervy moments towards the end against a Málaga side which looked dangerous at times, but in the end the league leaders put on another solid display. In fact, Real Madrid had three clear opportunities, through Cristiano Ronaldo, to widen the gap between the teams. The game finished with a win for the visitors, who have now gone two matches without conceding a goal. 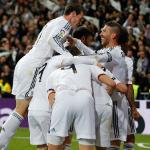