The event, which took place in the Hotel Palace in Madrid and which was attended by Florentino Pérez, was used to pay homage to second vice president Eduardo Fernández de Blas and ex-player Fernando Hierro.
The 'La Saeta' supporters club celebrated its thirty-sixth anniversary in the Hotel Palace in Madrid and paid homage to Eduardo Fernández de Blas, the club's second vice president, and ex-player Fernando Hierro. The event, where the basketball Copa del Rey was on display, was attended by Florentino Pérez; first vice president Fernando Fernández Tapias; Miguel Pardeza, director of Football; and Emilio Butragueño, director of Institutional Relations, among others. The Real Madrid Ex-players Association was also well represented.

The president of the Whites publicly recognised those who were being honoured and thanked them for their support of the club. He also highlighted the unity and stability the club is currently experiencing, which is one of the entity's greatest assets, and he spoke of the importance of the supporters clubs, which form the backbone of the Real Madrid fanbase.

Eduardo Fernández de Blas: "Every morning I am excited to be a Real Madrid fan and I am convinced that this team exists because of and for the members"
"I founded a supporters club because I believe that supporters clubs are the backbone of the Real Madrid fanbase. I also have the honour of sharing this homage with Fernando Hierro, who is an excellent madridista. I would also like to thank Florentino Pérez for his work, his humility, for rewarding our passion in the basketball, for bringing the academy to where it should be and for his future products"

Hierro: "My relationship with the club is fantastic; I feel like it gave me everything"
"I feel proud to have been at this club for 14 years. I am also happy, grateful and honoured by this homage. I would like to thank the La Saeta supporters club, which is named after the best player in the history of the club, and to thank Eduardo Fernández de Blas for his values and his great work".

"I think the team looks great both in defence and attack. It is going through a great period and is very confident. Ancelotti is very experienced and he has brought calm and peace of mind to the team. He was a player and it shows. He is a football man, and he gives me confidence". 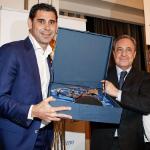