Illarramendi's first La Liga goal, a cracker by Bale and an Isco effort gave Real Madrid all three points. Now the team can focus on the first leg of their Champions League Round of 16 clash against Schalke 04.
Santiago Bernabéu

0
Real Madrid was in devastating form at the start of the game. With less than ten minutes played, the Whites had already created two clear chances and hit the crossbar. Teh first real moment of danger came from Benzema, but his low shot from outside the box was well saved by Manu Herrera (3'). The Frenchman was behind the next chance on goal as well, setting up Bale with a clever back heel. The onrushing Welshman's shot was blocked by Botía however before going out for a corner (8'). Di María tried to score directly from the resulting corner but his effort came off the bar.

From that point on Elche started to come into the game more and began to get more of a foothold on possession, which up until then had been monopolised by the home side. The opening goal came just after the half hour mark. A Di María corner fell to Illarramendi on the edge of the box and the midfielder volleyed the ball goalwards (34'). The shot came off Manu del Moral and caught Manu Herrera off guard before ending up in the back of the net.

The Whites now had the scoreboard the way they wanted it and could have increased their lead even further before the break. Not only did Benzema create the first chance of the game, but he was also central to the last one of the first half. The Frenchman once again tried his luck from outside the box but Manu Herrera was at hand again to deny him (42').

Elche began to press much higher up the pitch as both teams began to play a bit more sloppily. Neither side was clearly dominant during this period and no real chances on goal were created as a result. That was until Gareth Bale lifted the fans from their seats with perhaps the goal of the weekend. The Welshman received the ball 30 yards away from goal and stunned everyone by launching a powerful left-footed shot into the top right hand corner of the net, which came off the under side of the crossbar before going in. A spectacular goal which gave the home side some breathing room.

Bale's goal deflated the visitors, who had been playing well during the game, and gave Real Madrid even more confidence. Isco came on for Jesé (74') and killed off the encounter seven minutes later. The central midfielder got onto the end of a Benzema pass after running the length of the pitch and then beat Manu Herrera from a tight angle. Morata could have got a fourth goal, but the Elche keeper was able to save his shot in injury time. A resounding win before the team turns its attention to the upcoming Champions League encounter against Schalke 04. 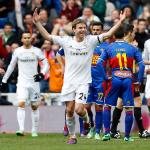