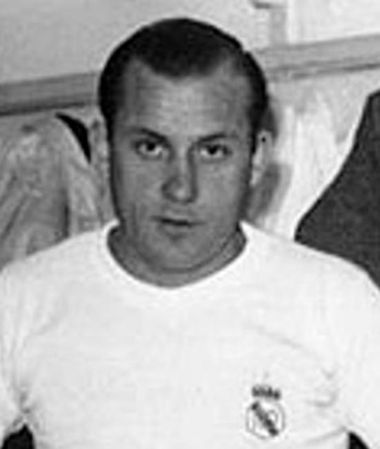 At the beginning of the 50s, Roque Olsen became one of the most outstanding offensive weapons for Real Madrid. Coming from Argentine club Racing, he was the team's leading scorer in his first season, along with Pahíño and Molowny. His instinct was evident from his official debut, in which he scored a hat-trick against Murcia. His scoring record was remarkable, with 66 goals in the 123 matches he played as a Real Madrid player.

Forward with a powerful shot, strong and a fighter, he is one of the most important players in the glorious history of Argentine football at Real Madrid. Olsen coincided in the attack during his later years with two other compatriots who marked an era in the club: Alfredo Di Stéfano and Héctor Rial.

Winner of the first two European Cups, Olsen left Real Madrid as he started: scoring goals. The Argentine scored against Las Palmas in the Spanish Cup, in his last game in the white shirt. After retiring, he had a long career as a coach in the First and Second Division. He passed away on June 15, 1992.