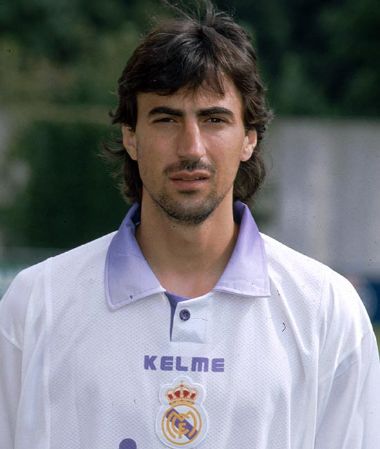 A whirlwind on the left wing

An Ollympic gold medallist in Barcelona 92, Amavisca arrived at Real Madrid from Valladolid in 1994, and his first season with the Whites saw him quickly become a cult figure. With Valdano in the dugout, he formed a lethal partnership with Zamorano, his mazy runs down the left flank and acrobatic assists producing numerous goals for the madridistas.

In his debut season at the club, Amavisca carved out a spot in the starting line-up from the 6th game in La Liga, when he netted in the historic thrashing of Barcelona (5-0), before going on to notch the first in the clash with Deportivo (2-1) which would hand the Whites the title.

Over the course of the following seasons, the Cantabria-born ace continued to add to his impressive figures for Real Madrid. He was in the starting eleven in the meeting with Dortmund which put the team in the Champions League final against Juventus, and took to the field in Amsterdam for the closing stages of La Séptima. He was also part of the squad which lifted the Intercontinental Cup in Tokyo against Vasco de Gama. In 1998, having made 144 appearances and scored 14 goals in a Whites' shirt, he brought his time with the club to an end and returned home to play for his local team Racing Santander.