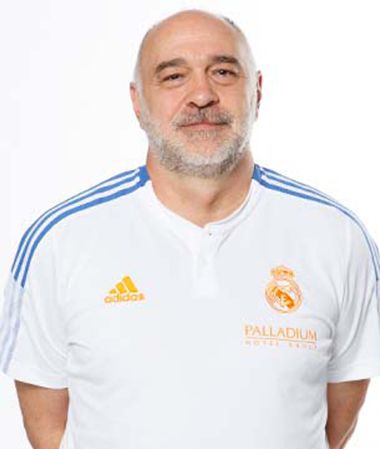 Pablo Laso was part of Real Madrid both as a player and a coach. Between 1995 and 1998, he conducted our team as point guard, playing 97 games and winning the FIBA Saporta Cup as a madridista in 1997. Following an impressive spell as a player which spanned 19 seasons in the ACB League and saw him become all-time leader in assists and recoveries, Laso moved into his career as a coach.

In 2011, he took up his post in the Real Madrid dugout and set about taking the team back to the pinnacle of European basketball. Over the course of his 11 seasons in charge, he oversaw more games than any other coach in the club's history (860), also clinching the most wins (659). Laso lifted an incredible 22 titles in that time: 2 European Cups, 1 Intercontinental Cup, 6 League titles, 6 Copas del Rey and 7 Super Cups, equalling Lolo Sainz as the second-most decorated coach the club has ever had, behind only Pedro Ferrándiz (27).